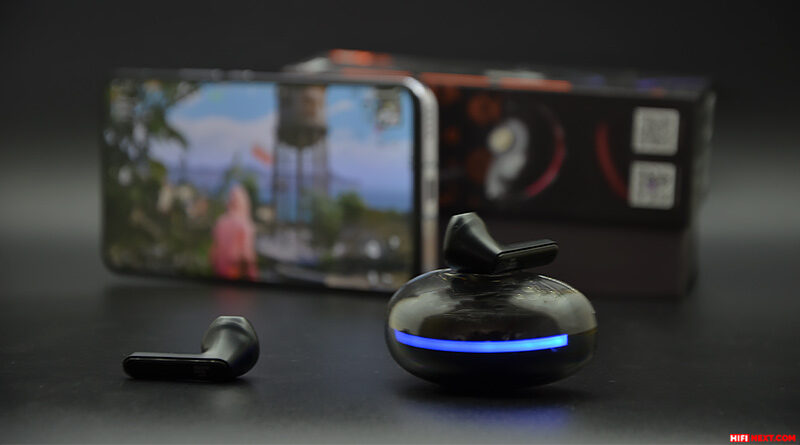 The new earphones from Tronsmart called Battle and stand out with stylish transparent case and are positioned as a budget device for gamers. Let’s take a closer look at the novelty and find out what pros and cons have earphones priced from $32.

Tronsmart Battle are open Earbuds. They allow you to naturally hear not only the music, but also the environment. Battle are made of rough matte plastic. The case is round and transparent, made of glossy plastic. Dust is clearly visible on such a surface and fingerprints quickly remain.

There is a company logo in the front in the middle, and Tronsmart inscription engraved on the case below.

USB Type-C port for charging on the other side instead of the logo.

On the bottom of the inner part of the case, there is a strip with RGB backlighting. It lights up when the lid of the case is opened.

The case slides in a circular motion rather than tilting back like most TWS earbuds.

Inside there are left and right earbud markings, as well as two charge status indicators: one for the case battery, the other for the headphone batteries.

Tronsmart Battle received Custom Engineered 13mm Driver, Bluetooth 5.0 module, and IPX4 splash and sweat protection. There is no support for the popular aptX codec, only SBC and AAC.

Tronsmart Battle are positioned for surround audio and ultra low latency when switching to game mode. Tronsmart Battle claims a latency of 45ms, which allows you to fully position enemies on the map when playing online shooters, like in specialized gaming headsets.

Tronsmart Battle connects quickly and without any problems. The first time we take out one earphone and the smartphone detects it in the list of available Bluetooth devices. After this Tronsmart Battle automatically connects when you open the lid. You can use both headphones, or each separately.

Tronsmart has a proprietary app for their headphones with the same name, but the Battle model is not there, so all control settings are made manually. (Hopefully soon Tronsmart Battle will also be added to the app support)

On the outside of the earphones, there is a sensor through which they are controlled. Double-tapping left and right switches tracks forward and backward, respectively. The same is true for accepting and rejecting a call. One touch on the left earpiece makes it quieter, and on the right one louder. A triple tap on any of the earbuds activates Game Mode. Holding both headphones for three seconds turns them off.

Since the Tronsmart Battle are not immersed in the ears, they can not give out a powerful bass and midrange, as do in-channel models. At the same time, Tronsmart Battle have a pleasant and fairly clear sound. Bass is also there, it’s just that they are not as pronounced as we would like. But if you also used any open earbuds before, then the sound will be fine for you. Tronsmart Battle sound great even at maximum volume, without any amplification or rattling, and this is one of the main advantages of the open earbuds in general.

In games, Tronsmart Battle does not lag behind in sound transmission, even in normal mode. But activating the game mode adds the audibility of the enemy’s steps on the map and his approximate location in shooters. If you prefer other game genres (not shooters), then switching to the game mode is not necessary. The only difference is noticeable in this.

We tested Tronsmart Battle in the popular mobile shooter PUBG Mobile: Resistance – and did not notice any delays, the earbuds did its job perfectly, providing excellent sound and full immersion in the gameplay.

The microphone is common for this price segment. The sound is normal for talking on the phone, but not good for more. The microphone is sensitive to the environment, therefore it strongly “catches” sounds nearby, it is not equipped with noise cancellation and wind protection.

Compared to the popular Apple Airpods, Tronsmart Battle fits in ears more securely, as it seemed to us. Perhaps it’s all about the matte rough plastic of the body, because the Airpods body is glossy and very slippery. Although the shape of the ears is also very important, because of which this or that model may simply not fit a particular person.

The case is round and unusual with RGB lighting on the bottom. Tronsmart positions such design as anti-stress – the manufacturer offers a rotate case to relieve stress. Who knows, maybe in intense game battles this will be useful. In any case, Tronsmart Battle case fits nicely in the hand and does not cause any inconvenience in a jeans pocket. There is also a chance that over time, scratches will be strongly visible on such transparent plastic.

Each Tronsmart Battle earbud has a 35mAh battery. The case has a built-in 500mAh battery. Tronsmart claims five hours of operation at 50% volume. The case gives another 15 hours. Charging takes up to two hours.

In fact, it’s about that and more. We listened to music at 70-80% and that was enough for five hours, so 50% will be even a little longer. From the case it was possible to charge the earphones twice, and there was still a charge.

Tronsmart again offered a product that was not similar to anyone else, for this money competitors offer completely ordinary solutions. There are currently no well-known fully wireless gaming earphones at this price point. There are a number of models in this price category like the QCY T5, Xiaomi Redmi AirDots, AirDots 2 and QCY T3 – however, neither one of them does not offer ultra low latency gaming mode, RGB backlighting and such an unusual design.

If you are a mobile gamer, Tronsmart Battle is definitely your choice. 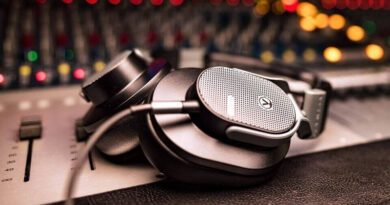 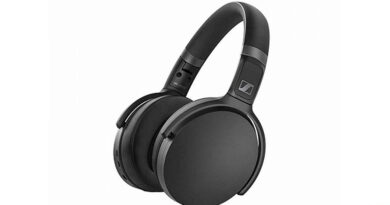